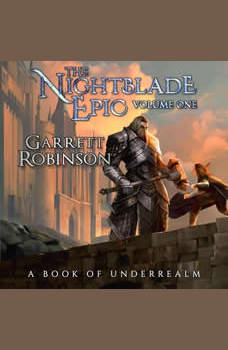 The Nightblade Epic Volume One: A Book of Underrealm

A #1 Bestseller.The Nightblade Epic is a fantasy story of iconic characters, intricate magic, and far-ranging adventure in an addictive fantasy world.

Loren did not ask for the dagger at her waist.

She did not ask to be born to cruel parents.

And she did not ask to be drawn into a conflict that threatens more harm than she can possibly imagine.

After fifteen years of toil, when her dreams of adventure have very nearly died out, a spark arrives to rekindle them.

A half-glimpsed coat of blue, dodging through the trees of the Birchwood. A wizard. A fugitive.

Loren will seek her fortune across all the nine kingdoms. But if she dies trying to earn it, she will be only the first to burn in a war that threatens all of Underrealm.

"People should check out Garrett, he is an excellent vlogger and writer." — Hank Green"An intriguing tale, well presented [with] some intense encounters, graphically described." — R. NicholsonGet the trilogy now!
Recommended