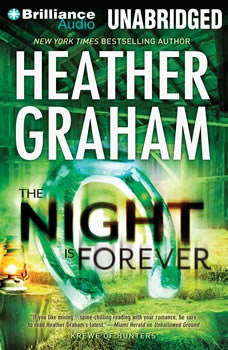 The Night Is Forever

A Ghost Rider in the Sky?What happened here, on a historic horse ranch outside Nashville, during the Civil War? And what’s happening now?Olivia Gordon works at the Horse Farm, a facility that assists patients with mental and physical recovery; her specialty is animal therapy. She’s always loved her job, always felt safe…until now.People are dying, starting with the facility’s founder, whose body is discovered in a ravine on the property—site of a massacre in 1862. And before every death, Liv sees a horse and rider, wearing a soldier’s garb, in the night sky…. Warning? Omen? Or clue?Liv calls in her cousin Malachi and his Krewe, an FBI unit of paranormal investigators, to discover the truth. New Krewe member Dustin Blake knows they need Liv’s involvement in the case, yet he’s worried about her safety. Because he and Liv quickly become more than colleagues…and he doesn’t want to lose her to the endless night.