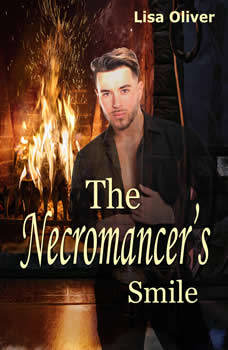 Detective Dakar Rhodes is an alpha wolf shifter who's short on sleep and patience. Called to yet another crime scene, definitely the work of a serial killer, he's shocked to learn the Pedace Police Department has a Necromancer as a consultant. Considering he'd moved to Pedace because of the lack of a coven in the area, he wasn't pleased with the new development. His previous dealings with magic users never ended well. But when ordered to show the consultant the respect befitting his position, Dakar bites his tongue and longs for a swift conclusion to the case.

Necromancer Prince Sebastian York, or Sy to his friends, has a real issue with people. He doesn't like or trust them, but because of his position, he has to deal with them. Dead people are so much easier - at least they don't want anything from him. But Sy has been raised to do his duty and when he's called to a crime scene, he doesn't expect anything much to happen beyond talking to a few spirits. The last thing he thought he'd find is a wolf shifter claiming to be his mate.

One short meeting has a wealth of repercussions. Finding a serial killer is easy; coping with relationships is anything but. Demons, journalists, long held grudges and a familiar with loyalty issues all combine to make for a hectic time. It's a case of one step forward, two steps back for Dakar and Sy, but when evil comes calling will they be able to rely on each other for a chance at an HEA?

This story is the first in a planned trilogy for our two main characters. A complete story, the epilogue does set the scene for book two, but this can be read as a standalone. This book contains a few intimate situations suitable for adults only and is M/M. Some graphic violence.