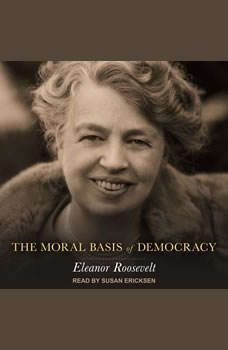 The Moral Basis of Democracy

With the threat of the Third Reich looming, Eleanor Roosevelt employs the history of human rights to establish the idea that at the core of democracy is a spiritual responsibility to other citizens. Roosevelt then calls on all Americans, especially the youth, to prioritize the well-being of others and have faith that their fellow citizens will protect them in return. She defines this trust between people as a trait of true democracy. Roosevelt advances an optimistic model for the democracy of the future, and although we've taken some steps in the direction of her vision, it's still a long way from reality. The issues first addressed in this 1940 essay—namely financial inequality and racial discrimination—are sadly still relevant today, as bigotry continues to undermine our national unity. Her first publication as first lady, The Moral Basis of Democracy is an honest and heartfelt call for all Americans to choose love and faith over hatred and fear. Roosevelt takes an inspiring stance in defense of democracy, progress, and morality; the wisdom imparted here is timeless, and a must-listen for every American.

April 16th. The year is 1963. Birmingham, Alabama has had a spring of non-violent protests known as the Birmingham Campaign, seeking to draw attention to the segregation against blacks by the city government and downtown retailers. The organizers lo...