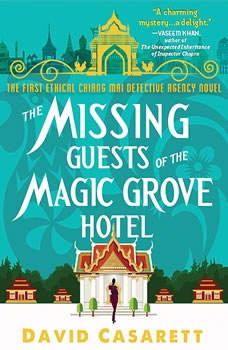 The Missing Guests of the Magic Grove Hotel

A fascinating mystery featuring Ladarat Patalung, the first and only nurse detective in Thailand.As a nurse ethicist, Ladarat Patalung works to save the lives of her patients, and to make sure the ones she can't save have at least the dignity of a "good death." But when wealthy foreign travelers start to go missing all across Thailand, Detective Wiriya Mookjai fears that a killer is at large, and turns to Ladarat for help. The travelers have nothing in common, except for brief stays at a mysterious resort, known as the Magic Grove Hotel...Ethical Chiang Mai Detective AgencyMurder at the House of Rooster HappinessThe Missing Guests of the Magic Grove Hotel