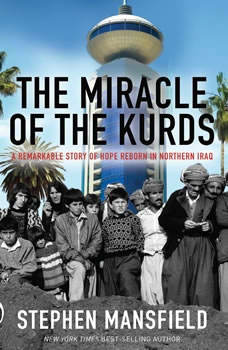 The Miracle of the Kurds: A Remarkable Story of Hope Reborn In Northern Iraq

Kurdistan is what America wanted Iraq to be. It&rsquo;s America&rsquo;s reward.Hundreds of thousands of Kurds were murdered under the tyrannical regime of Saddam Hussein. Some four thousand Kurdish villages were destroyed. Betrayed again and again by the nations of the world, the Kurds were as decimated as any people in history.Then came the Kurdish Miracle, that combination of ancient wisdom and modern economic genius that is now making the Kurdish homeland one of the most prosperous places on earth. Many experts predict that this homeland will soon be the world&rsquo;s newest nation.Stephen Mansfield witnessed much of this history. In this audio book, he has turned the skills that have made him a New York Times best-selling author upon the Kurdish story. He has captured the agony and the determination, the horror and the genius of one of the most remarkable stories of our time.

The Politics of Diplomacy
by James A. Baker III

Few men have played such a critical role in the most pivotal events of the second half of the twentieth century. In this audio presentation - in his own words and his own voice - James A. Baker, III uses his unique perspective to take us inside tho...

Of Paradise and Power
by Robert Kagan

From Robert Kagan, a leading scholar of American foreign policy, comes an insightful analysis of the state of European and American foreign relations. At a time when relations between the United States and Europe are at their lowest ebb since...

The Faith of the American Soldier
by Stephen Mansfield

Since men and women in battle not only face the prospect of their own deaths but also must fashion a moral rationale for killing, the battlefield is often a place of tremendous religious transformation. Do men and women at war revert to the faith o...

In this first collection of interviews since the bestselling 9-11, our foremost intellectual activist examines crucial new questions of U.S. foreign policy. In this important program of interviews conducted by award-winning radio journalist David Ba...

The Greatest Threat
by Richard Butler

Civilization may face no greater enemy than Saddam Hussein, and yet the major powers allowed Saddam to face them down. Here, Richard Butler tells the inside story of the UNs failed attempt to stop Saddam and explains the terrible cost of that failur...

Ask the Question
by Stephen Mansfield

For most of American history, the conventional wisdom was that religion was too private a matter to ask a political candidate about. But in a political landscape in which we will see Muslims, atheists, Mormons, Buddhists, and Christians of all strip...

Kissinger on Kissinger
by Winston Lord

The 2016 election of Donald J. Trump exposed a deep divide in American politics and culture, one that pollsters and pundits didn't seem to realize was there. But Trump did, and he used it to his advantage in ways that surprised nearly everyone, ...