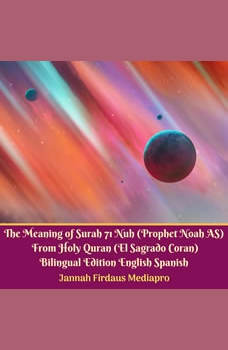 In Nuh, the seventy-first surah, The Holy Quran refers to Nuh’s prophethood in snippets. Prophet Nuh AS (Noah) is a messenger of God. When Prophet Nuh AS realizes the messages are not accepted by the community, he supplicated to God. God planned to flood the community of Nuh at a specified time. God commanded Prophet Noah AS (Nuh) to warn the people of the flood. God brings forth the water from the skies to prove Nuh’s message to be accurate. In The Holy Quran, the flood is a symbolization of the mercy of God to the believers. Allah SWT (God) gives the world a new beginning.

The disbelievers disbelieved God's message and messenger Nuh so they were drowned. Because his people are unable to grasp the idea of the existence of one God, the lives of Prophet Muhammad SAW and Prophet Nuh AS (Noah) are parallel to each other for the time of the revelation of this surah. The surah was used to increase the faith of the believers; it shows that Prophet Nuh AS (Noah) before Prophet Muhammad SAW had difficulties in dealing with the disbelievers of his time.

The surah is entirely Meccan meaning it was revealed while Prophet Muhammad SAW was trying to create a Muslim community in Mecca. According to the Tanzil version, it was the seventy-first surah revealed. It was revealed after the sixteenth surah, An-Nahl (“The Bee”) and before the fourteenth surah Ibrahim (“Prophet Abraham AS”). According to Noldeke’s version, Nu? was the fifty-third surah to be revealed. It was revealed after the thirty-seventh surah Saaffaat (“Those Who Set The Ranks”), and before the seventy-sixth surah, Insaan or Dahr (“Man” or “Time”). Main themes of Surah Nuh's include: belief in One God (Pure Monotheism), signs of God (the Earth, Sun, Moon), and punishment of denying Allah's message.

Prophet Hud AS (Eber) was a prophet of ancient Arabia mentioned in The Holy Quran. The eleventh surah (chapter) of The Holy Quran, Hud, is named after him, though the narrative of Surah Hud comprises only a small portion of the chapter. Prophet Hud ...

Audiobook Islamic Folklore The Spider of Mount Thawr and Prophet Muhammad English Languange Version Based from The Noble Quran & Al-Hadith.I am a spider who is higher in rank than other spiders. With all humility, if all the spiders in this world we...

The Meaning of Surah 75 Al-Qiyamah (The Resurrection) From the Holy Quran Bilingual Edition In English and Spanish Languange Ultimate Version.The blessed Chapter, revealed in Mecca, has forty Verses. The designation of the Chapter, denoting Resurrec...