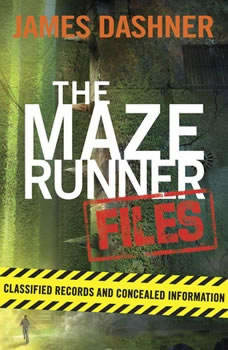 Classified files from the world of the #1 New York Times bestselling Maze Runner series, perfect for fans of The Hunger Games and Divergent. The first and second books, The Maze Runner and The Scorch Trials, are now major motion pictures featuring the star of MTV's Teen Wolf, Dylan O’Brien; Kaya Scodelario; Aml Ameen; Will Poulter; and Thomas Brodie-Sangster! Also look for James Dashner’s newest novels, The Eye of Minds and The Rule of Thoughts, the first two books in the Mortality Doctrine series.

"[A] mysterious survival saga that passionate fans describe as a fusion of Lord of the Flies, The Hunger Games, and Lost."—EW.com

[STAR] “James Dashner’s illuminating prequel [The Kill Order] will thrill fans of this Maze Runner [series] and prove just as exciting for readers new to the series.”—Shelf Awareness, Starred

"Take a deep breath before you start any James Dashner book."-Deseret News

Two Moons
by RE Johnston

When night falls and dreams come……they can change everything.How will Jay use what he learns?On a parallel world, the people know reincarnation is real, but that knowledge comes with a price. The accumulated wisdom of previous lives ca...

Gunner Skale: An Eye of Minds Story (The Mortality Doctrine)
by James Dashner

The NEW YORK TIMES bestselling series reaches an epic climax! James Dashner returns to the series he began--just in time for Dak, Sera, and Riq to make their final stand in ancient Greece alongside a young Alexander the Great. Fix the past. Save ...

Infinity Ring #1: A Mutiny in Time
by James Dashner

History is broken, and three kids must travel back in time to set it right! When best friends Dak Smyth and Sera Froste stumble upon the secret of time travel -- a hand-held device known as the Infinity Ring -- they're swept up in a centuries-long ...