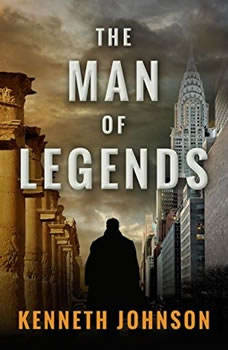 The Man of Legends

“Johnson takes a big gamble by telling such a complex tale invoking every genre imaginable while juggling distinct and deep characterizations. The bet pays off, resulting in a story that will be popular with book clubs and fun to discuss.” —Associated PressNew York City, New Year’s weekend, 2001. Jillian Guthrie, a troubled young journalist, stumbles onto a tantalizing mystery: the same man, unaged, stands alongside Ulysses S. Grant, Theodore Roosevelt, and Gandhi in three different photographs spanning eighty-five years of history.In another part of town, Will—an enigmatic thirty-three-year-old of immense charm, wit, and intelligence—looks forward to the new year with hope and trepidation. Haunted by his secret past and shadowed by a dangerous stranger, he finds himself the object of an intense manhunt spearheaded by an ambitious Vatican emissary and an elderly former UN envoy named Hanna.During the next forty-eight hours, a catastrophic event unites Will, Jillian, and Hanna—and puts them in the crosshairs of a centuries-old international conspiracy. Together, the three must unravel an ancient curse that stretches back two millennia and beyond, and face a primal evil that threatens their lives and thousands more.Award-winning science-fiction mastermind Kenneth Johnson blends epic adventure, romance, and evocative drama into an intense supernatural thriller rooted in one of the great untold legends of human history.