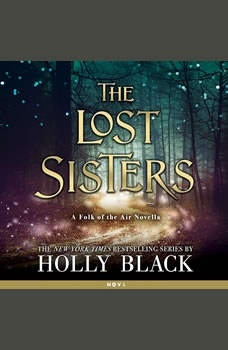 Series: The Folk of the Air

Sometimes the difference between a love story and a horror story is where the ending comes...While Jude fought for power in the Court of Elfhame against the cruel Prince Cardan, her sister Taryn began to fall in love with the trickster, Locke.Half-apology and half-explanation, it turns out that Taryn has some secrets of her own to reveal.The Lost Sisters is a companion e-novella to the New York Times bestselling novel The Cruel Prince, by master writer Holly Black.

The Wyrm King
by Holly Black

In the final installment of Beyond the Spiderwick Chronicles, Nick and Laurie had thought they solved their giant problems when they drove all the giants into the sea. But now, the Grace kids have come back to tell them they may have more trouble co...

The Nixie's Song
by Holly Black

The Spiderwick Chronicles leave the old-fashioned charm of New England far behind and head south for some fiendish faerie fun in the hot Florida sun. Eleven-year-old Nicholas Vargas only thinks his life has been turned upside down after his develope...

In the dark days that followed the first world war, it seemed to many that all dreams had died, that wonder and fantasy could not survive in a world that knew trenches and poppies blooming where the blood fell.Come now as we travel through strange a...

The Frituals
by Katelyn Costello

Is having Magick worth the cost? Each year men and elves are tested to see if the Fritual of their kingdom will be revealed, a powerful person able to control an elemental magick. Shauna Flynn has always wanted to meet a Fritual, but these magi...

A Giant Problem
by Holly Black

Nick and Laurie have a giant problem and it's a lot bigger than they originally thought.  When Taloa sent them off to find her sisters, they discovered a single fire breathing giant, but as it turns out, that one giant is just the tip of t...