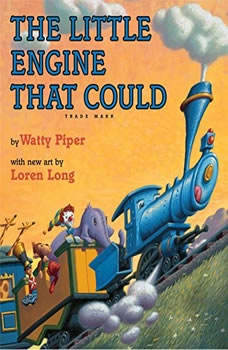 The Little Engine That Could: The Complete, Original Edition

Series: The Little Engine That Could

The story of a train filled with toys and gifts for little boys and girls that breaks down before reaching the children. After asking several passing trains for help over the hill, a little blue train agrees to help the stranded toys. Even though she is small, the blue train tries her best to bring the toys to the children on the other side of the hill.

The Littlest Train
by Chris Gall

In this endearing story of a tiny toy train, the creator of the hit series Dinotrux now breathes life into more than a half-dozen trains that climb, haul, chug, zip, and zoom.In a small room, down a short flight of stairs, there lives a little toy ...