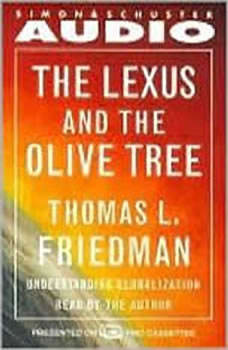 The Lexus and the Olive Tree: Understanding Globalization

P As the Foreign Affairs columnist for IThe New York Times, Thomas L. Friedman has traveled to the four corners of the globe, interviewing people from all walks of contemporary life -- peasants in the Amazon rain forest, new entrepreneurs in Indonesia, Islamic students in Teheran, and the financial wizards on Wall Street and in Silicon Valley. P Now Friedman has drawn on his years on the road to produce an engrossing and original look at the new international system that, more than anything else, is shaping world affairs today: globalization. P His argument can be summarized quite simply. Globalization is not just a phenomenon and not just a passing trend. It is the international system that replaced the Cold War system. Globalization is the integration of capital, technology and information across national borders, in a way that is creating a single global market and to some degree, a global village. You cannot understand the morning news or know where to invest you money or think about where the world is going unless you understand this new system, which is influencing the domestic policies and international relations of virtually every country in the world today. And once you do understand the world as Friedman explains it, you'll never look at it quite the same way again. P Using original terms and concepts -- from "The Electronic Herd" to "DOScapital 6.0" -- Friedman shows us how to see this new system. With vivid stories, he dramatizes the conflict of "The Lexus and the Olive Tree" -- the tension between the globalization system and ancient forms of culture, geography, tradition and community -- and spells out what we all need to do to keep this system in balance. P Finding the proper balance between the Lexus and the olive tree is the great drama of the globilization era, and the ultimate theme of Friedman's challenging, provocative book -- essential listening for all who care about how the world really works.

How to Survive (and Thrive) During the Great Gold Bust Ahead
by Harry S. Dent

Over the years, bestselling author and renowned Harvard economist Harry Dent has accurately predicted the dot com bust of the early 2000's, the crash of the U.S. housing market in 2006, the financial meltdown of 2008 and the plummet in crude oil pri...

Aftershock
by Robert B. Reich

The author of 12 acclaimed books, Robert B. Reich is a Chancellor's Professor of Public Policy at the University of California, Berkeley, and has served in three national administrations. While many blamed Wall Street for the financial meltdown, Aft...

From Beirut to Jerusalem
by Thomas L. Friedman

In From Beirut to Jerusalem, Thomas L. Friedman of The New York Times, author of The Lexus and the Olive Tree, has drawn on his decade in the Middle East to produce the most trenchant, vivid, and thought-provoking book yet on the region. No issue i...

In a sweeping narrative about the people and the politics behind the budget, Pulitzer Prize–winning reporter David Wessel looks at the 2011 fiscal year (which ended September 30) to see where all the money was actually spent, and why the budge...

Living Well in a Down Economy for Dummies
by Tracy Barr

Get smart about spending and saving—and ride out a recession!Looking for practical ways to make every dollar count? This savvy guide gives you expert tips for tightening your belt and saving cash in every area of your life—from your hou...

HUMANITY EVOLVES AT THE SPEED OF JUSTICE. This is a book about justice and the technologies, systems, and public policies that are necessary to achieve justice. Humanity's technology is evolving at an exponential rate, but our laws and cultural...

Friedman is very interesting author and is best reading his own book. He has interesting political theories based not only on his NYT upbringing, but also the real world while travelling all over the world. He may not always be right, but he deserves the audience. A top book on this subject and very worthwhile listening.