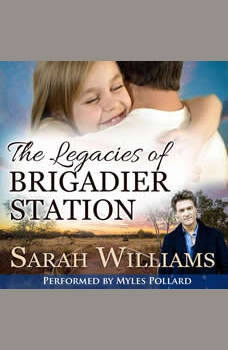 The Legacies of Brigadier Station

Can Lachie be the father Hannah needs? And the man Abbie deserves?When tragedy strikes the small rural town and secrets begin to unravel…

Lachie McGuire is trying to make a fresh start. He’s sobered up and is making amends for all the people he has hurt and the pain he has caused. But some of his past actions have consequences. Even if he doesn’t remember them.

Needing her independence, single-mum Abbie Forsyth accepted a nursing position in the small outback town of Julia Creek and uprooted her daughter, Hannah from the only life she had ever known. Now, in the dusty, sun burned land they are creating a life together, just the two of them.

When Lachie is injured and needs medical assistance, Abbie is there for him. She’s by his side every step of the way, including letting him stay with them while he recovers from surgery. But Abbie knows how volatile life with an addict can be and she has to think about her daughter’s safety above her own growing affection for the handsome grazier.

Return to the Outback for the third instalment in the bestselling Brigadier Station series.

Each book in the Brigadier Station series can be read as a STANDALONE:

* The Brothers of Brigadier Station

* The Sky over Brigadier Station

* The Legacies of Brigadier Station

Each of Sarah's stories are linked so you can find out what happens to the other brothers and your favourite characters in future books.

The Fighter
by Michael Farris Smith

A blistering novel of violence and deliverance set against the mythic backdrop of the Mississippi DeltaThe acres and acres of fertile soil, the two-hundred-year-old antebellum house, all gone. And so is the woman who gave it to Jack, the foster mot...

Raven meets Ben once a year. She doesn’t have his details. Just meets this sexy, hot farmer when he’s down for the Royal Show in Adelaide. That’s how it’s been for the last two years. Will he show up this year at their rendez...