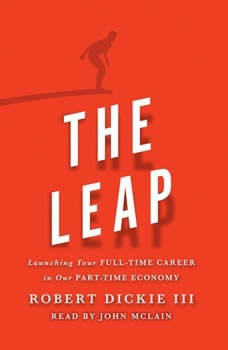 The Leap: Launching Your Full-Time Career in Our Part-Time Economy

The economy has made major leaps in the past decade. Have you made the leap along with it?

Work is different for this new generation than it was in the past. Long-term careers are on the way out, and “gigs”—part-time, contract, or freelance work—are becoming more common. Whether you're in the midst of a career or just getting started, now is the time to prepare for changes headed your way.

President of Crown and former CEO of an international company, Robert Dickie has a wealth of knowledge and experience to draw from. With these he outlines seven proven strategies for operating in our ever-changing landscape and helps you make an action plan to achieve results.

What does it look like to avoid anchors, create multiple income streams, and brand yourself? The Leapwill help you navigate these and other critical tasks for having lasting work in a changing economy.

Unleash your leadership potential.No matter who you are, you can lead—and lead well.That is the message New York Times bestselling author John C. Maxwell gives in this power-packed guidebook: Leadership 101. Here the consummate leader offers a...

The 21 Irrefutable Laws of Leadership
by John C. Maxwell

This unique Deluxe Audio Edition of the New York Times bestseller includes the unabridged audio book on three CDs; a highly designed, 24-page, 4-color booklet; and a fourth CD with a presentation in PowerPoint format that you can share with others o...

If you can win with people, you can win!Many people focus on other talents and abilities first- such as polishing their communication or leadership skills or taking courses to expand their base of knowledge- but they forget that good relationships a...