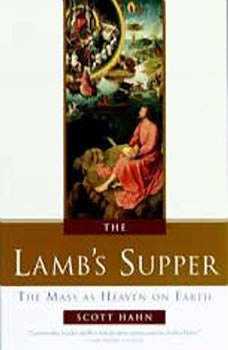 The Lamb's Supper: The Mass as Heaven on Earth

As seen on EWTN with over 600,000 copies sold! Bestselling author Scott Hahn unveils the mysteries of the Mass, offering readers a deeper appreciation of the most familiar of Catholic rituals.

Of all things Catholic, there is nothing that is so familiar as the Mass. With its unchanging prayers, the Mass fits Catholics like their favorite clothes. Yet most Catholics sitting in the pews on Sundays fail to see the powerful supernatural drama that enfolds them. Pope John Paul II described the Mass as "Heaven on Earth," explaining that what "we celebrate on Earth is a mysterious participation in the heavenly liturgy."

The Lamb’s Supper reveals a long-lost secret of the Church: The early Christians' key to understanding the mysteries of the Mass was the New Testament Book of Revelation. With its bizarre imagery, its mystic visions of heaven, and its end-of-time prophecies, Revelation mirrors the sacrifice and celebration of the Eucharist.

Beautifully written, in clear direct language, bestselling Catholic author Scott Hahn's new book will help readers see the Mass with new eyes, pray the liturgy with a renewed heart, and enter into the Mass more fully, enthusiastically, intelligently, and powerfully than ever before.

Consuming the Word
by Scott Hahn

From the bestselling author of The Lamb's Supper and Signs of Life comes an illuminating work that unlocks the many mysteries of the Catholic sacrament of the Eucharist.Long before the New Testament was a document, it was a sacrament. Jesus called t...

Scott Hahn is an internationally recognized Catholic lecturer and theologian. His books Hail, Holy Queen and Publishers Weekly bestseller The Lamb’s Supper began Hahn’s examination of the Catholic faith. With First Comes Love, he thou...

A journal-style book containing inspirational messages from Pope Francis-Time magazine's Person of the Year for 2013 Only a little over a year into his papacy, Pope Francis is being hailed by the news media, Christians, and non-Christians alike as...

Catholicism for Dummies
by John Trigilio

Want to know more about Catholicism? Catholicism For Dummies presents the rich tapestry and history of the Catholic Church – from devotions to doctrines. You’ll find a description of the Catholic Mass, the seven sacraments, the liturgic...

Reasons to Believe
by Scott Hahn

In Reasons to Believe, Scott Hahn, a convert to Catholicism, explains the "how and why" of the Catholic faith--drawing from Scripture, his own struggles and those of other converts, as well as from everyday life and even natural science. Hahn shows ...

Saint Catherine of Siena audiobook
by Bob and Penny Lord

The life of Saint Catherine of Siena"O Eternal God, accept the sacrifice of my life for the Mystical Body of Thy Holy Church." Saint Catherine in Ecstasy.Mystic - Stigmatist - Incorrupt. Travel with us to Siena, and St. Dominic's Church where s...

Angels and Saints
by Scott Hahn

Angels and saints. Catholics tend to think of them as different from the rest of us. They’re cast in plaster or simpering on a holy card, performing miracles with superhero strength, or playing a harp in highest heaven. Yet they are very near ...