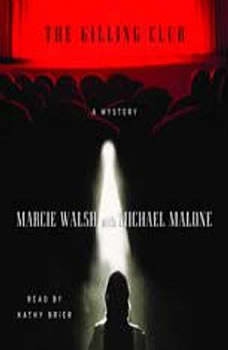 Suspenseful, romantic, and filled with humor, The Killing Club is a mystery “written” by popular One Life to Live character Marcie Walsh with award-winning writer Michael Malone.

Over a decade ago in the small town of Gloria, New Jersey, feisty, red-headed outcast Jamie Ferraro and eleven friends from Gloria Hart High School started a club. They would come up with ingenious ways to kill people they didn’t like–pretty much everybody they knew–and write down these “pretend” murders in a Death Book. Calling themselves the Killing Club, the group of misfits voted on who was most likely to get away with their imaginary murders. It was harmless fun...or so they thought.

Now, more than a decade later, Detective Sergeant Jamie Ferrara of the Gloria Police Department has a homicide investigation on her hands. The victim is Ben Tymosz, one of her fellow Killing Club members. And worse, Ben’s death is an exact replica of a “murder” once dreamed up in the club. Jamie’s boss (her fiancé, Rod) is sure the death is just a ghoulish accident. But when the club reunites for Ben’s funeral, the unimaginable happens: another murder, another Killing Club member dead, another crime copied from the Death Book.

Soon, Jamie is getting death threats–anonymous notes with details only those in the club would know. Someone is targeting the Killing Club, and all signs point to one of their own. Jamie’s oldest friends turn into suspects. In a race against time, Jamie must separate her teenage memories from her hardened cop’s instincts and find the killer before everyone in the group is dead, including Jamie.