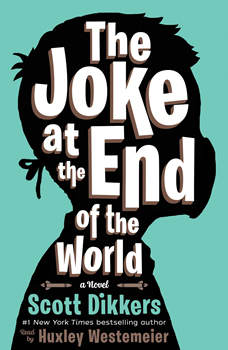 The Joke at the End of the World

His father is a genius scientist. But is this boy’s future more deadly than his past?

America, 1957. Twelve-year-old Patrick Stoodle has never been good at making friends. So when his dad promises a super-exciting surprise for his birthday, he hopes life will change for the better. Instead, he’s thrown into 2020 by a time machine and lands in the middle of a viral pandemic, troops in the streets, and a dangerously escalating race war.

Discovering his father is not who he believes, Patrick desperately searches for clues to learn if this timeline is real or can be undone. But with violence building to a fever pitch and his immune system crippled by aggressive modern diseases, he may not make it back to the fifties alive…

Can Patrick escape this lunatic world before it becomes a one-way trip to doomsday?

The Joke at the End of the World is a mind-bending YA science fiction novel. If you like fast-paced action, warped turns on twisted tropes, and thought-provoking social commentary, then you’ll love bestselling and award-winning author Scott Dikkers’ rollercoaster ride.

Listen to The Joke at the End of the World to laugh in the face of death today!