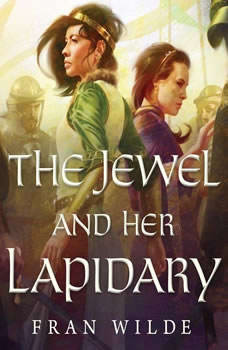 The Jewel and Her Lapidary

The kingdom in the Valley has long sheltered under the protection of its Jewels and Lapidaries, the people bound to singing gemstones with the power to reshape hills, move rivers, and warp minds. That power has kept the peace and tranquility, and the kingdom has flourished.Jewel Lin and her Lapidary Sima may be the last to enjoy that peace.The Jeweled Court has been betrayed. As screaming raiders sweep down from the mountains, and Lapidary servants shatter under the pressure, the last princess of the Valley will have to summon up a strength she’s never known. If she can assume her royal dignity, and if Sima can master the most dangerous gemstone in the land, they may be able to survive.PRAISE FOR THE JEWEL AND HER LAPIDARY AND FRAN WILDE “The Jewel and Her Lapidary is a splendid tale of courage and transformation in a world as exquisite as Wilde's prose. You will be utterly entranced.” -- Ken Liu, Hugo, Nebula, and World Fantasy Award winner and author of The Grace of Kings“Extraordinary world-building and cascading levels of intrigue make Wilde’s debut fantasy novel soar.” --Publishers Weekly on Updraft