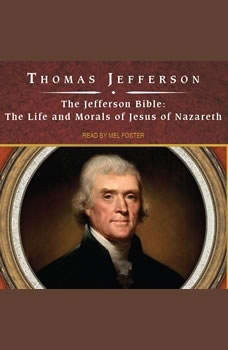 The Jefferson Bible: The Life and Morals of Jesus of Nazareth

In the early nineteenth century, Thomas Jefferson, the third president of the United States and the principal author of the Declaration of Independence, conceived the idea of extracting a gospel purified of what he saw as extraneous philosophical, mythological, and theological elements. To do so, he took verses from the four canonical gospels and arranged them into a single narrative, focusing on the actual words of Jesus. This work was never published during Jefferson's lifetime but was inherited by his grandson and printed for the first time in the early twentieth century. The original bound manuscript, popularly referred to as The Jefferson Bible, is held by the United States National Museum in Washington.

Letters from Jesus: Finding Good News in Christ's Letters to the Churches
by Paul Ellis

Did you know that Jesus sent seven letters from heaven?The letters from Jesus to the Revelation churches must be the most misunderstood chapters in the Bible. Many people dismiss them as too hard, too strange, or too scary. “Did Jesus really s...

A wise and frugal government, which shall leave men free to regulate their own pursuits of industry and improvement, and shall not take from the mouth of labor the bread it has earned - this is the sum of good government. Thus reads the wisdom of Th...

Many of us know and love the stories and characters of the Old Testament such as Joseph, Moses and Jonah. But how do we view its importance in relation to New Testament teaching and our 21st century experiences? This accessible yet powerful addition...