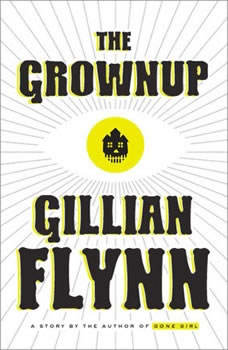 The Grownup: A Story by the Author of Gone Girl

Gillian Flynn’s Edgar Award-winning homage to the classic ghost story, published for the first time as a standalone.

A canny young woman is struggling to survive by perpetrating various levels of mostly harmless fraud. On a rainy April morning, she is reading auras at Spiritual Palms when Susan Burke walks in. A keen observer of human behavior, our unnamed narrator immediately diagnoses beautiful, rich Susan as an unhappy woman eager to give her lovely life a drama injection. However, when the "psychic" visits the eerie Victorian home that has been the source of Susan’s terror and grief, she realizes she may not have to pretend to believe in ghosts anymore. Miles, Susan’s teenage stepson, doesn’t help matters with his disturbing manner and grisly imagination. The three are soon locked in a chilling battle to discover where the evil truly lurks and what, if anything, can be done to escape it.

“The Grownup,” which originally appeared as “What Do You Do?” in George R. R. Martin’s Rogues anthology, proves once again that Gillian Flynn is one of the world’s most original and skilled voices in fiction.

Missouri born author, Gillian Schiller Flynn, was raised in Kansas City by parents who were both professors at a local community college. She is said to have been painfully shy as a child, and found an escape mechanism in reading and writing.

After earning her degrees at the University of Kansas and Northwestern University, Flynn did freelance writing for U.S. News and World Report, then was hired by Entertainment Weekly. She was laid off from that position in 2008, but has nevertheless been quoted as saying that she could not have written a novel had it not been for being a journalist first. It taught her that, when writing, you cannot wait for something spiritual to move you......you just have to start writing and get it done

A recurring frustration for Author Flynn has been the notion held by many readers and critics alike, that women in general must always be good, nurturing people. She said readers sometimes still have trouble with a female character just being "pragmatically evil, bad, and selfish". While she was working for Entertainment Weekly, she was also writing novels during her own free time. Among her three novels are Sharp Objects, Dark Places, and Gone Girl. Each of the three have had their own great success, but most popular has been Gone Girl, which was adapted to film by Flynn after the rights were sold to Twentieth Century Fox for $1.5 million, and was released in October of 2014 to critical acclaim. The awards list seems never-ending for all three novels.