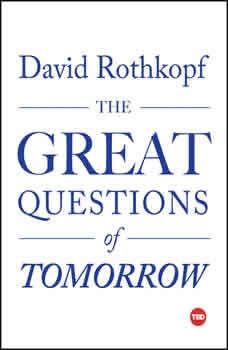 The Great Questions of Tomorrow: The Ideas that Will Remake the World

A unique tour around the world in search of the great thinkers of our time and their next big ideas.With the world at the threshold of profound changes, the question becomes: Where are the philosophers? Where are the great thinkers of today? Where is the next Jefferson, Curie, or Mandela? Which technologies and changes in the nature of life will they harness, embrace, or be inspired by? As the world’s center of gravity has shifted over the centuries from Europe and then to the US, so too has the center of intellectual gravity. With that center shifting to Asia and also to the emerging world, will those places produce the transformational thinkers of the twenty-first century? Embarking on an around-the-world search, David Rothkopf strives to answer these questions, uncovering what the next big ideas are and where they’re emerging. Who are the people behind the ideas, and how they will be colored by their place and culture of origins? Many of these ideas will be sought from unexpected markets—the way mobile money is being pioneered in Tanzania and Kenya, for example, or the way that access to the Internet is being explored or treated as a basic human right in Costa Rica, Estonia, and Finland. Along the way, Rothkopf highlights key areas in which transformational thinking will be needed. Core notions such as democracy and government, war and peace, money and markets, human rights and philosophy, and work and identity. Through fascinating and thought-provoking stories, Rothkopf ultimately reveals ideas that are being debated now—ones that will produce incredible breakthroughs in the years ahead.

Sometimes designed objects reject their users: a computer mouse that doesn't work for left-handed people, for example, or a touchscreen payment system that only works for people who read English phrases, have 20/20 vision, and use a credit card. The...

What do you Know about A.I. ? Here it comes a lot of knowledge on the greatest force that you had seen ever. A.I. is our future, from the past, a great means to arrive on the moon through the rooms of the time

Download now to get key insights from this book in 15 minutes.Welcome to the age of behavioral addiction - an age in which half of the American population is addicted to at least one behavior. We obsess over our emails, Instagram likes, and Facebook...