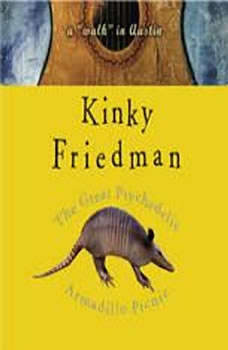 The Great Psychedelic Armadillo Picnic: A "Walk" in Austin

Kinky Friedman, the original Texas Jew boy, guides readers through the sights, sounds, food, and various and sundry oddities of his favorite Texas city. Known for live music and food, Austin is also the home of Willie Nelson, Janis Joplin, Stevie Ray Vaughan, and a number of other music legends. In this slightly insane and surprisingly practical guide to the coolest city in Texas, you ll find out which restaurant President Bush thinks is the best burger joint; you ll get a glimpse of Willie Nelson's home; and the best view of the Mexican free-tailed bats as they make their nightly flights to and from the Congress Avenue Bridge. This newest addition to the Crown Journeys series includes quizzes, puzzles, and bits of personal history you won't find in a Frommer's guide.

I enjoyed this audio the first time and when I ran out of other things to listen to, I listened again. It is a good sign if one will listen to an audiobook again; so few require that. It is a reliable, enjoyable listen. The man is a great orator, compelling and authentic - I would listen to him anytime. And, finally, he has a quirky, dark sense of humor that I relished.