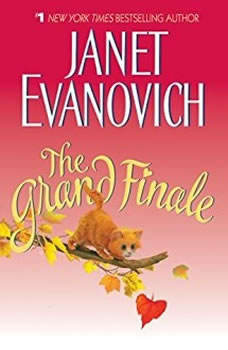 From the #1 New York Times bestselling author comes a revised, repackaged novel sure to please her many fans. She writes "high speed comic mayhem" (Detroit Free Press); she's "a blast of fresh air" (Washington Post); "side-splitting funny" (Publishers Weekly) and "a winner" (Glamour). In other words, she's Janet Evanovich.Berry Knudson had a talent for disaster, but when she climbed a tree to rescue a kitten, she wasn't prepared for the scrumptious hunk undressing in a nearby window, or her dive downward that smashed Jake Sawyer's pizza and won his heart! But was there room in her chaotic schedule for a risk-taking inventor with dreams? She took classes, delivered pizzas, and cared for three eccentric old ladies she rescued from the train station. But Jake thrived on a challenge, and he could be very inventive. Could he teach her there was time to make butterscotch pudding and let herself be loved?

This novel is perhaps the silliest I've ever come up against and is why I don't usually read romances. I ordered it because of who the author is. I found myself hoping desperately that the guy would indeed turn out to be a serial killer and most grusomely get rid of Berry. The humor was absolutely nonexistent and sophmoronic yes, I know that's not a word. I'm mad at myself because I followed it through to the bitter end. Had to be a very early Evanovich effort because I love Stephanie Plum!