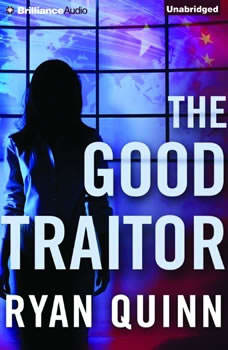 The US ambassador to China is killed in a suspicious plane crash just days after a news article links Chinese spies to US business interests. The American intelligence community is left scrambling to investigate possible connections between the crash and a series of other high-profile deaths.On the other side of the world, ex-CIA operative Kera Mersal returns to the United States determined to clear her name after being branded a traitor for exposing illegal government surveillance. There, former colleague and fellow fugitive J. D. Jones contacts her with a new assignment: find out who is staging accidents to murder news sources. As the news site continues to publish stories about top-secret CIA programs and Chinese government corruption, Mersal reunites with old allies to uncover the truth and prove her loyalty to her country once and for all. But Mersal’s investigations put her on the trail of a sinister hacker whose own motives may influence a vaster—and more deadly—geopolitical conspiracy than either of the world’s two largest superpowers is prepared to handle.

A Darker Place
by Jack Higgins

A famous Russian writer and ex-paratrooper named Alexander Kurbsky has gotten fed up with the Putin government, and decides he wants to "disappear" into the West. He is under no illusions, however, about how the news will be greeted at home, having ...

The Traitor's Story
by Kevin Wignall

When fifteen-year-old American Hailey Portman goes missing in Switzerland, her desperate parents seek the help of their neighbor, Finn Harrington, a seemingly quiet historian rumored to be a former spy.Sensing the story runs deeper than anyone yet k...

A Deniable Man
by Sol Stein

Susan Whitcomb, a brilliant New York trial lawyer, is catapulted into the vicious world of international terrorism when she learns that her father, an Army general, has been assassinated. Suddenly she finds herself a pawn in a deadly game of escalat...

The Tracker
by Chad Zunker

Trust no one. Sam Callahan learned this lesson from a childhood spent in abusive foster care, on the streets, and locked in juvie. With the past behind him and his future staked on law school, he is moonlighting as a political tracker, paid to hide ...

The Chancellor Manuscript
by Robert Ludlum

“[The Chancellor Manuscript] exerts a riveting appeal, as it seems to justify our worst nightmares of what really goes on in the so-called intelligence community in Washington.”—The New York Times Book ReviewDid J. Edgar Hoover die...

A Matter of Honor
by Jeffrey Archer

Featuring a bonus interview with the authorAdisgraced British colonel bequeaths a mysterious letter to his only son. The moment Adam Scott opens the yellowing envelope, he sets into motion a deadly chain of events.Within days, he's running for his l...