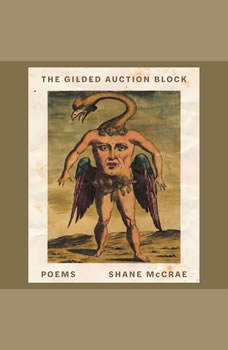 This program is read by the author.An incisive new collection of poetry on political and contemporary themesI’m made of murderers I’m madeOf nobodies and immigrants and the poorand a whole / Family the mother’sliver and her lungsIn The Gilded Auction Block, the acclaimed poet Shane McCrae considers the present moment in America on its own terms as well as for what it says about the American project and Americans themselves. In the audiobook’s four sections, McCrae alternately responds directly to Donald Trump and contextualizes him historically and personally, exploding the illusions of freedom of both black and white Americans. A moving, incisive, and frightening exploration of both the legacy and the current state of white supremacy in this country, The Gilded Auction Block is an audiobook about the present that reaches into the past and stretches toward the future.

The Body's Question by Tracy K. Smith received the 2002 Cave Canem Poetry Prize for the best first book by an African-American poet, selected by Kevin Young. Confronting loss, historical intersections with race and family, and the threshold between ...

Library of Small Catastrophes, Alison Rollins's ambitious debut collection, interrogates the body and nation as storehouses of countless tragedies. Drawing from Jorge Luis Borges's fascination with the library, Rollins uses the concept of the archiv...

A searing volume by a poet whose work conveys “the visceral effect that prison has on identity” (New York Times).Felon tells the story of one man in fierce, dazzling poems― canvassing his wide range of emotions and experiences thro...

Duende is the award-winning second collection by the Poet Laureate of the United States.

American Sonnets for My Past and Future Assassin
by Terrance Hayes

A powerful, timely, dazzling collection of sonnets from one of America's most acclaimed poets, Terrance Hayes, the National Book Award-winning author of Lighthead In seventy poems bearing the same title, Terrance Hayes explores the meanings of Amer...

James Brown. John Brown's raid. Brown v. the Topeka Board of Ed. The prize-winning author of Blue Laws meditates on all things "brown" in this powerful new collection.Divided into "Home Recordings" and "Field Recordings," Brown speaks to the way per...