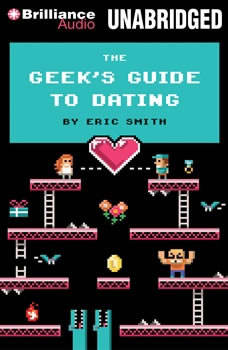 The Geek's Guide to Dating

Boldly Go Where No Geek Has Gone Before!You keep your action figures in their original packaging. Your closets are full of officially licensed Star Wars merchandise. You’re hooked on Elder Scrolls and Metal Gear, but now you’ve discovered an even bigger obsession: the new girl who just moved in down the hall.What’s a geek to do? Take some tips from The Geek’s Guide to Dating. This hilarious primer is jam-packed with cheat codes, walkthroughs, and power-ups for navigating the perils and pitfalls of your love life with ease. Geeks of all ages will find answers to the ultimate questions of life, the universe, and everything romantic, from First Contact to The Fellowship of the Ring and beyond. The Geek’s Guide to Dating will teach fanboys everywhere to love long and prosper.

You are cordially invited to attend...The Sweet Potato Queens are bona fide experts at planning a marvelous marriage (and ending one—flip this book right on over if you're looking for advice on dumping a deadweight hubby!), so who better to pr...

The Bro Code
by Barney Stinson

From the hit TV show How I Met Your Mother comes Barney Stinson’s words of wit, wisdom, and awesomeness, The Bro Code—the New York Times bestseller (really!) with more than a million copies in print all around the world.Everyone’s ...

The Goomba's Book of Love
by Steven R. Schirripa

Move over Miss Lonelyhearts . . . Steven R. Schirripa, author of the runaway bestseller A Goomba’s Guide to Life, is back with more life lessons from the neighborhood. Recalling stories of his own colorful journey from the streets of Bensonhur...

He's Just Not That Into You
by Greg Behrendt

The Instant New York Times Bestseller He's Just Not That Into You -- based on the popular episode of Sex and the City -- educates otherwise smart women on how to tell when a guy just doesn't like them enough, so they can stop wasting time making ex...

The Playbook
by Barney Stinson

Since the dawn of history man has searched for the answer to the most fundamental of questions: "Why am I here . . . not banging chicks?" The search is over. Now, with the help of The Playbook, you'll be able to approach any beautiful woman, discove...

In the tradition of the #1 best-seller SeinLanguage, Bantam Books proudly presents the first book by Paul Reiser, television's sharpest, funniest observer of love, marriage and other mysteries of  life. A veteran comic performer, Reiser is...