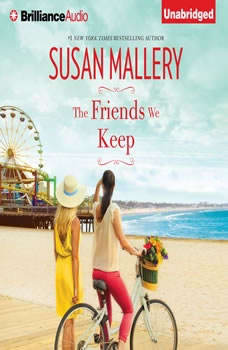 The Friends We Keep

After five years as a stay-at-home mom, Gabby Schaefer can't wait to return to work. Oh, to use the bathroom in peace! No twins clamoring at the door, no husband barging in, no stepdaughter throwing a tantrum. But when her plans are derailed by some shocking news and her husband's crushing expectations, Gabby must fight for the right to have a life of her own.Getting pregnant is easy for Hayley Batchelor. Staying pregnant is the hard part. Her husband is worried about the expensive fertility treatments and frantic about the threat to her health. But to Hayley, a woman who was born to be a mom should risk everything to fulfill her destiny—no matter how high the cost.Nicole Lord is still shell-shocked by a divorce that wasn't as painful as it should've been. Other than the son they share, her ex-husband left barely a ripple in her life. A great new guy tempts her to believe maybe the second time's the charm…but how can she trust herself to recognize true love?As their bonds of friendship deepen against the beautiful backdrop of Mischief Bay, Gabby, Hayley, and Nicole will rely on good food, good wine, and especially each other to navigate life's toughest changes.

Maybe This Time
by Jennifer Crusie

Andie Miller is ready to move on with her life. She wants to marry her fiancé and leave behind everything in her past, especially her ex-husband, North Archer. But when Andie tries to gain closure with him, he asks one final favor of her. A dis...

Forget Me Not
by Fern Michaels

From #1 New York Times bestselling author Fern Michaels, beloved worldwide for her heartwarming novels, comes a story of family secrets, friendship, and second chances, as one woman is confronted with the shocking truth about her past.Illustrator Lu...