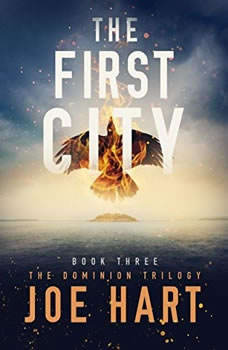 In the thrilling conclusion to Joe Hart’s Dominion Trilogy, Zoey discovers who she truly is—and who she must become.Zoey has only ever known a world with few women and a society capable of unimaginable evil. Now she’s about to learn she may be the only hope it has for salvation.After she and her companions flee a vicious attack, barely escaping with their lives, Zoey finds herself faced with a new threat: video evidence suggesting she is the mother of an unborn baby girl—and the key to mankind’s survival. Knowing that her former captors will stop at nothing to control the power that lies within her, Zoey sets out on her own for the last American city, Seattle, in search of answers. But a new enemy awaits her there, and the truth she seeks may lead to her destruction as well as that of all humankind.This stunning finale, hailed by bestselling author Blake Crouch as a “rapturous, thought-provoking, [and] impossible-to-put-down thriller,” begs us all to consider what we would do when asked to choose between humanity’s survival—and our own.