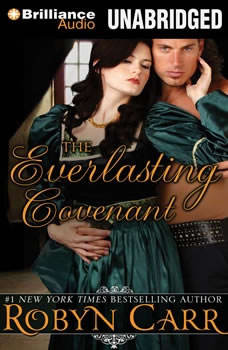 Anne Gifford’s dowry—or lack thereof—is of no concern to Sir Dylan DeFrayne. Wrapped in each other’s arms, what more could they possibly need? Yet the young lovers’ passion can never be sanctioned—the DeFraynes and Giffords have been sworn enemies for decades. Lest more blood be shed, the two must keep their affair a secret…and plot their elopement.Clad in threadbare hand-me-downs, Anne never expects the powerful and aged Brennan Forbes to remember her face, let alone propose marriage. Anne’s parents hastily accept—the union aligns the Giffords with the Duke of York, while the DeFraynes pledge allegiance to the House of Lancaster, on the eve of the War of Roses.The arranged marriage looming ever closer, Dylan must brave the battlefield and bypass enemy lines to rescue his beloved. With a dynastic war and bitter rivalries standing in their way, Anne and Dylan must embark on a tortuous path that only the strongest of loves can endure.

Robyn Carr was first published in 1978, and it took her thirty years to make it to The New York Times bestseller List,” referring to 2007’s A Virgin River Christmas. But that was just the beginning of what has become an amazing career.

Surprisingly, Robyn didn’t always know she wanted to be a writer. She had planned to become a nurse. She married her high school sweetheart four weeks before he left for Air Force Officer’s Training School at the peak of the Vietnam War. Because she found herself following Jim from base to base, Robyn never had a chance to pursue nursing. Her husband worked long hours and often traveled. To pass the time Robyn read. When doctors instructed her to stay down and keep her feet up during a complicated pregnancy, her neighbor began bringing her ten paperbacks a week.

Robyn has always written about strong women, no matter the period in which they live. For the first fifteen years of her career she wrote romance, the early books of which were all historical, but later included contemporaries. Needing a change, she branched out and wrote a thriller, which she said she’ll never do again because, for her, it was too creepy. She also tried her hand at non-fiction and what she smilingly describes as “several brilliant but as yet unsold screenplays,” in addition to articles and short stories.

She says that reading is important because people need a safe place to deal with the emotions they’re stuck with, and a book is a safe place to do that. She believes there’s great value in her novels dealing with real issues in a realistic manner.

In April 2016 MIRA books will publish their first Robyn Carr hardcover novel, What We Find, the introduction to a new series by the popular author. Set in the heart of the Rocky Mountains, What We Find explores the healing powers of rural Colorado in a brand-new story of fresh starts, budding relationships and one woman’s journey to finding the happiness she’s long been missing.

Robyn and her husband enjoy traveling, often taking research trips together. Their son and daughter are grown. Robyn says that, in addition to reading her novels and making snide remarks about how she’s used family scenarios to her advantage, they have made her a happy grandmother.