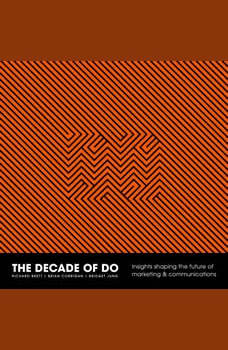 The Decade Of Do: A new era for marketing and communications

Welcome to The Decade Of Do – a new era for marketing and communications. Since the start of the advertising industry in the nineteenth century, it has been about telling. Now, thanks to the social media and digital revolution, everyone has a voice.

The result is a cacophony of noise where it feels like everyone is talking louder and faster. Companies, governments and the people who lead them are under intense scrutiny in a world of forced transparency where everyone has their own story to tell. It’s become increasingly difficult to separate fact from fiction.

We also face existential threats as the climate and environmental crisis takes hold. Democracy and its institutions are being undermined. Intolerance and inequality are still rife. This is why actions speak louder than words in The Decade Of Do. It’s a time when people, brands and organisation are taking on the world’s problems and trying to solve them. This book looks at why this is happening, the pioneers who are driving it forward and what this means for the rest of us.

Do you wonder how people make money online? Or do only have a clue with the online businesses but you don’t have the idea where to begin?Now, can you imagine being your own boss, working at your own pleasure and schedule? Just a few simple tri...

Ghosting the News
by Margaret Sullivan

Ghosting the News tells the most troubling media story of our time: How democracy suffers when local news dies. Reporting on news-impoverished areas in the U.S. and around the world, America's premier media critic, Margaret Sullivan, chart...