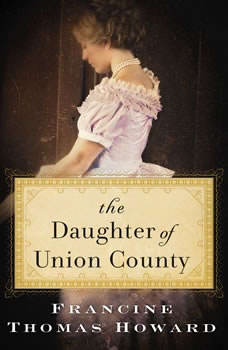 The Daughter of Union County

Fourteen years after the end of slavery, Lord Henry Hardin and his wife, Lady Bertha, enjoy an entitled life in Union County, Arkansas. Until he faces a devastating reality: Bertha is unable to bear children. If Henry doesn’t produce an heir, the American branch of his family name will die out. So Henry, desperate to preserve his aristocratic family lineage, does the unthinkable.When Salome, a former slave and Henry’s mistress, gives birth to a white-skinned, blue-eyed daughter, Henry orders a reluctant Lady Bertha to claim the child as their own…allowing young Margaret to pass into the white world of privilege.As Margaret grows older, unaware of her true parentage, devastating circumstances threaten to shroud her in pain and shame…but then, ultimately, in revelation. Despite rumors about Margaret’s true identity, Salome is determined to transform her daughter’s bitter past into her secure future while Henry goes to extraordinary lengths to protect his legacy. Spanning decades and generations, marked by tragedy and redemption, this unforgettable saga illuminates a family’s fight for their name, for survival, and for true freedom.

The Coming
by Daniel Black

Lyrical, poetic, and hypnotizing, The Coming tells the story of a people's capture and sojourn from their homeland across the Middle Passage—a traumatic trip that exposed the strength and resolve of the African spirit. Extreme conditions produ...