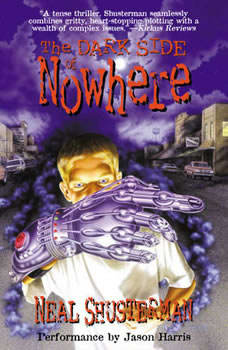 The Dark Side of Nowhere

A classic science fiction novel from bestselling author Neal Shusterman is back in print.

Jason is having a bad day. The kind of day when you just don't feel like yourself. Only for Jason, it's not just a feeling. He really isn't himself. Not anymore. Who is he? That's the problem. Jason isn't sure. And it's not just him. Everyone in town is acting weird. His friends. His parents. Everyone. Billington is usually such a normal town. As Jason is about to discover, nothing will ever be normal again….

Guys Read: The Dirt on Our Shoes
by Neal Shusterman

T-Bin has been traveling through space for years to deposit its passengers on a new planet, to give them a new life. But now, mere days from arrival, Tanner can’t shake the feeling that there’s a more sinister plot at work. A ...