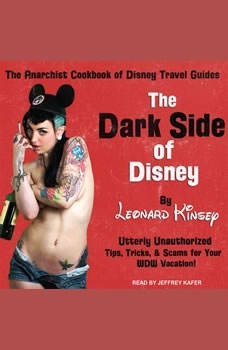 The Dark Side of Disney

The Dark Side of Disney reveals all of the tips, tricks, scams, and stories that THEY don't want you to know about! Unabashedly unafraid of offending the family-oriented audiences catered to by other Disney travel guides, author Leonard Kinsey gives intrepid travelers access to the seamy, raunchy, and often hilarious underbelly of Walt Disney World.From cautionary tales of scoring illegal tickets, to thrilling accounts of exploring off-limits areas, to chronicles of drug-induced debauchery, this completely unauthorized guidebook will change the way you think about vacationing at "The Happiest Place on Earth."

Walk Quietly
by Gregory A. Kompes

Planning to walk a Camino de Santiago pilgrimage in Spain? This is the book for you. A collection of tips to help you plan, prepare, train, shop for, and walk the famous Camino de Santiago written by someone who spent 7 weeks walking the Via de La P...

With generous splashes of popular culture and human interest, the NPR Road Trips series introduces you not only to far-off locations and unusual destinations, but to the people who inhabit them-and seek them out. Each story focuses on real locations...

With generous splashes of popular culture and human interest, the NPR Road Trips series introduces you not only to far-off locations and unusual destinations, but to the people who inhabit them-and seek them out. Each story focuses on real locations...