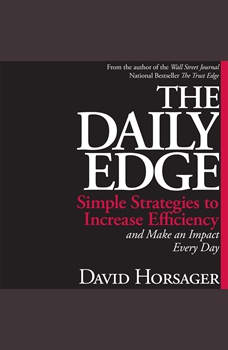 The Daily Edge: Simple Strategies to Increase Efficiency and Make an Impact Every Day

Wall Street Journal bestselling author David Horsager frequently hears executives lament that their hands are more than full trying to balance the barrage of tasks they face on a daily basis. While he never set out to be a productivity expert, Horsager realized that over the years he has developed and adopted dozens of extraordinarily practical time- and energy-saving techniques that could help today's leader. The key objective is to become so effective in the little things that you have enough time for more meaningful interactions. In The Daily Edge, you'll learn strategies such as identifying the key Difference-Making Actions on which to focus your efforts. Perhaps it is time to set a personal or even company-wide “power hour,” during which you do not attend meetings, answer the phone, or reply to emails, creating the time and space to really focus and get things done. The thirty-five high-impact ideas Horsager introduces in succinct, quick-read chapters are easily implemented and powerful on their own. Taken together, they form a solid wave of efficacy that enables you to get more done, keep your energy up, and make sure that you're able to honor all your relationships, both personal and professional.