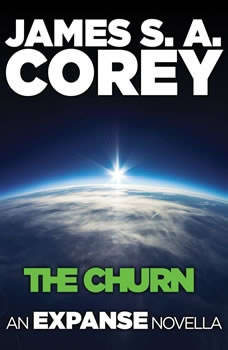 The Churn: An Expanse Novella

This is the past Amos Burton tried to leave behind. Set in the hard-scrabble solar system of The Expanse, this novella takes the bestselling scifi series to the slums of Baltimore and into a dark world of organized crime, drugs, prostitution, and murder.Before his trip to the stars, before the Rocinante Timmy was confined to a Baltimore where crime paid you or killed you. Unless the authorities got to you first.On a future Earth beset by overpopulation, pollution, and poverty, people do what they must to survive. The Churn follows a crime boss named Burton as his organization is threatened by a new private security force tasked with cleaning up the city. When the police start cracking down, Burton and his footsoldiers-loyal lieutenant Erich, former prostitute Lydia, and young enforcer Timmy-become increasingly desperate to find a way out.From New York Times bestselling author James S. A. Corey, The Expanse is now a hit television series. The ExpanseLeviathan WakesCaliban's WarAbaddon's GateCibola BurnNemesis GamesBabylon's AshesPersepolis RisingThe Expanse Short Fiction The Butcher of Anderson StationGods of RiskThe ChurnThe Vital AbyssStrange Dogs