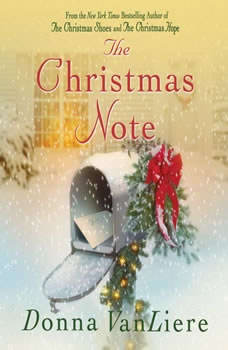 Donna VanLiere's Christmas books have enthralled millions of readers. Now she delivers a new inspirational novel about an unlikely friendship between two women—a friendship that will change each of their lives forever. Gretchen Daniels has recently moved into a condo with her two children to be closer to her mother, Miriam. As they build a life together in their new community, they notice a mysterious young woman, Melissa McCreary, who lives next door. She has few possessions, little personality, and keeps to herself. One day a local landlord who is looking for Melissa knocks on Gretchen's door for assistance. Melissa's mother has died and in the coming weeks the landlord needs Melissa to empty her mother's apartment. Gretchen reaches out and offers to help Melissa, but the apartment is a gut-wrenching shamble of a home. There is little worth saving except for a few photos and a note that is discovered on the crate beside the bed. It is unfinished, but in the two scribbled lines, Melissa discovers secrets about her family that she never could have imagined. Can two very different women embark on a journey that explores a long-buried need for forgiveness, hope, and redemption?

Not long after Hannah, a college student, experiences increasing anxiety and a sudden collapse, all signs point to the surprising circumstances of her birth. Hannah soon learns from her parents that she was adopted and is the survivor of a failed ab...