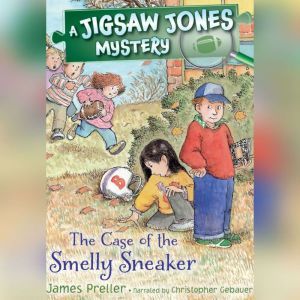 The Case of the Smelly Sneaker

James Preller's wry, witty, Jigsaw Jones chapter book mysteries are once again available to inspire the next generation of young readers, featuring both new titles and classroom classics! The Case of the Smelly Sneaker It's girls versus boys in the biggest football game of the year! Jigsaw Jones is referee, while his partner, Mila Yeh, is coaching the girls' team. Bobby Solofsky has no doubt the boys will win, but the girls have a secret weapon. Then one of Bigs Maloney's sneakers goes missing, and Bobby wants to call off the whole game. Can Jigsaw and Mila find this sneaker thief in time to save the game?