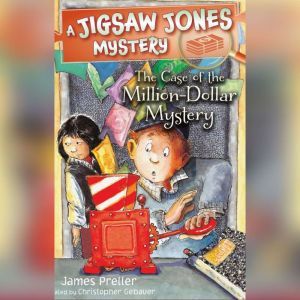 The Case of the Million-Dollar Mystery

Featuring friendship, school, family, and a diverse community, these early illustrated chapter books from James Preller have it all. Got a mystery to solve? Jigsaw Jones is on the case. Eddie Becker has the idea of a lifetime, and creates plans for what he promises is going to be a million-dollar invention. Then the plans get stolen. Worst of all, after Jigsaw does some digging, he suspects the principal may be the thief! Now Jigsaw has to invent a gadget of his own to find out the truth. James Preller's wry, witty, Jigsaw Jones books are once again available to inspire the next generation of young readers, featuring both new titles and classroom classics!