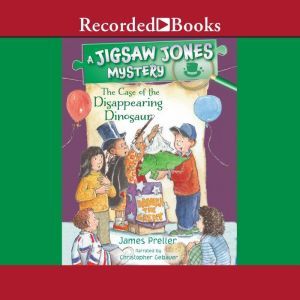 The Case of the Disappearing Dinosaur

Featuring friendship, school, family, and a diverse community, these early illustrated chapter books from James Preller have it all. Got a mystery to solve? Jigsaw Jones is on the case. Anything that ever goes missing or lost, Jigsaw and his partner, Mila, can find. Then, during a magic show, they watch a toy dinosaur disappear, right in front of their eyes! Even the magician can't seem to bring it back. Luckily Jigsaw doesn't believe in magic, and he's determined to find that dinosaur! James Preller's wry, witty, Jigsaw Jones books are once again available to inspire the next generation of young readers, featuring both new titles and classroom classics!