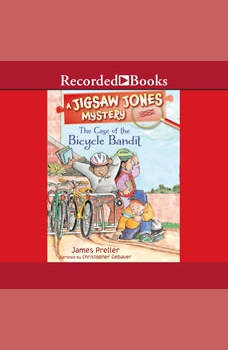 The Case of the Bicycle Bandit

James Preller's wry, witty, Jigsaw Jones chapter book mysteries are once again available to inspire the next generation of young readers, featuring both new titles and classroom classics! The Case of the Bicycle Bandit Why would anyone steal an old hunk of junk? Ralphie Jordan loves his beat-up bike, Old Rusty. The tires are bent, spokes are missing, and the chain keeps falling off. But Ralphie wouldn't trade it for any other. Then Old Rusty goes missing just outside the library, and Ralphie is devastated. It's up to Jigsaw and Mila to find out who stole it?and the thief may be closer than anyone would have guessed!

Diary of an Odd Enderman Book 2: An Unofficial Minecraft Book
by Mr. Crafty

The Adventure Continues With Your Favorite Enderman!This odd Enderman finally receives an official name that he will forever go by. After escaping a heat-filled environment where his last diary ended, his new adventures have become more thrilling, d...

James Preller's wry, witty, Jigsaw Jones chapter book mysteries are once again available to inspire the next generation of young readers, featuring both new titles and classroom classics! The Case of the Glow-in-the-Dark Ghost Glow-in-the-dark footp...

The Case from Outer Space
by James Preller

Jigsaw Jones is back! In The Case from Outer Space, an original mystery from James Preller, Jigsaw and his crew?Mila, Joey, and Danika?find a clue that implies an alien may be about to visit their school! Can it be true? And what does the Little Fre...

Timmy Failure: Sanitized for Your Protection
by Stephan Pastis

Some surprising news sends Timmy Failure on a hilarious caper as the New York Times best-selling series continues. Behold! You are all about to be witnesses to greatness. In this fourth volume of Timmy Failure's memoirs, Timmy is forced to hit the r...