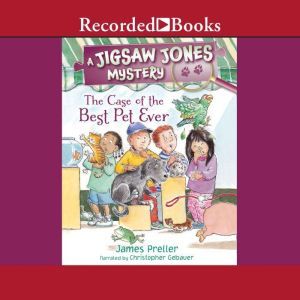 The Case of the Best Pet Ever

Featuring friendship, school, family, and a diverse community, these early illustrated chapter books from James Preller have it all. Got a mystery to solve? Jigsaw Jones is on the case. When Bobby Solofsky is accused of stealing the grand prize for a pet talent show, it's up to Jigsaw to clear his greatest rival's name. Soon, more things start to go missing at the pet store and Jigsaw enters his own dog into the contest to solve the case. Can he find the prize medal in time for the competition? James Preller's wry, witty, Jigsaw Jones books are once again available to inspire the next generation of young readers, featuring both new titles and classroom classics!