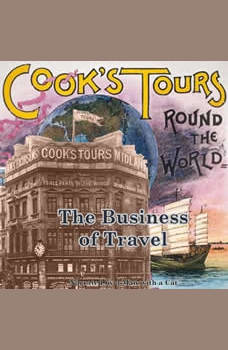 The Business of Travel: Fifty Years' Record of Progress. A History of Thomas Cook & Son

Narrator: Man with a Cat

Messrs. Thomas Cook and Son have been frequently requested by their friends to supply an account of the origin and progress of their business. They consider its fiftieth anniversary, in the year 1891, a fitting occasion for complying with that request. I undertook to write the story for them, and the necessary documents were placed in my hands. If it be alleged that the firm's name appears too often in the following pages, it may be replied that this was inevitable owing to the business itself being emphatically a personal one. It has been doubted whether any member bearing the name of Cook is now connected with the firm. Examples are given in the last chapter of misapprehensions on this head. Readers of this work will learn the authentic facts, and it is probable that the work itself, in addition to communicating much novel information, will render it more difficult for an impostor to succeed in personating one of the firm or to be accepted as belonging to it.

Before they went bankrupt in 2019, Thomas Cook & Son had been in business since 1841. Starting with one man arranging a day-trip by train for Temperance campaigners, by the year of its fiftieth Jubilee, the company had opened an office on Broadway, invented Telecommuting (with real Telegraphs), started their own international bank, gained the monopoly for travel on the River Nile, provided logistical support to the British Empire in their fight against Muslim counter-revolutionaries, made Cockneys a common sight in Paris, dramatically improved conditions for Muslims undertaking their pilgrimage to Mecca, and maybe they even gave a well-known French writer the inspiration to write about a man travelling around the world in eighty days. (Mr Thomas Cook took 222 days when he attempted the feat).

Juneau, Alaska is an integral part of the United States, yet offers up the feeling that’s it’s a world away from the Lower 48. Juneau holds the unique title of being not only the largest capital city by land mass but one of the most remo...

Setting the Table
by Danny Meyer

The bestselling business book from award-winning restauranteur Danny Meyer, of Union Square Cafe, Gramercy Tavern, and Shake ShackSeventy-five percent of all new restaurant ventures fail, and of those that do stick around, only a few become icons. ...

How do I open or grow my hotel, a resort, inn, or bed & breakfast?This is a question I am often asked, but before I answer, let me begin by asking you a couple of questions.Is the idea of being your own boss sound appealing to you?  Is the...

How To Plan a USA Cross Country Trip
by HowExpert

If you want to do a cross country trip in America, then get "How To Plan a USA Cross Country Trip".This step-by-step guide to planning a cross-country trip is a necessary resource for anyone planning to travel across the United States. It is designe...

Travel Tips for Everyone
by David Goodin

Are you frustrated by travel delays?Need knowledge on the travel best deals?Want to maximize points?Written by a consultant who travels over 45 weeks out of the year, this book gives you the inside scoop of the travel industry from a travelers' pers...