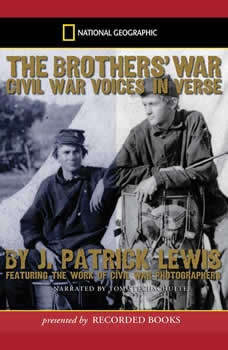 In compelling poetry, the spirit of Frederick Douglas, John Brown, and William Tecumseh Sherman comes alive. So does the heart-rending tale of a Confederate son and Union father, the desperate struggle of boys fighting like men, the horrifying shrieks of the wounded, and the pitiful plight of a toil-weary slave. One poetic letter finds distraught parents aching for a son who hasn't been heard from in months. While another spotlights a wounded lad languishing in a POW camp, determined to survive his living nightmare. The poems of National Children's Book Week honoree J. Patrick Lewis-acclaimed author of more than 45 works and frequent book reviewer for the New York Times-have graced the pages of dozens of magazines and more than 70 anthologies. In The Brothers' War, Lewis' vivid word-pictures provide youthful readers with a poignant portrait of the brutal conflict that slaughtered a generation and left millions in despair.