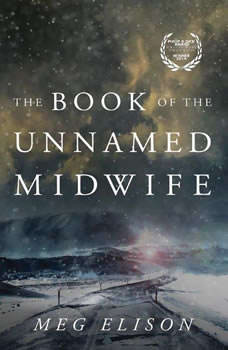 The Book of the Unnamed Midwife

Series: The Road to Nowhere #1

A Publishers Weekly Best Book of 2016 and Philip K. Dick Award WinnerWhen she fell asleep, the world was doomed. When she awoke, it was dead.In the wake of a fever that decimated the earth’s population—killing women and children and making childbirth deadly for the mother and infant—the midwife must pick her way through the bones of the world she once knew to find her place in this dangerous new one. Gone are the pillars of civilization. All that remains is power—and the strong who possess it. A few women like her survived, though they are scarce. Even fewer are safe from the clans of men, who, driven by fear, seek to control those remaining. To preserve her freedom, she dons men’s clothing, goes by false names, and avoids as many people as possible. But as the world continues to grapple with its terrible circumstances, she’ll discover a role greater than chasing a pale imitation of independence.After all, if humanity is to be reborn, someone must be its guide.

The Beachhead
by Christopher Mari

After Earth is decimated, the entire remaining human population is marooned on an unfamiliar beach. The enigmatic winged Orangemen leave the survivors with instructions to remake their society, basic tools and weapons, and a few thousand books, incl...

From the Shadows
by Jacqueline Brown

Can cruelty be disguised as courage? Does safety lie in savagery? What happens when the hopes of our hearts are forced to face the truth of our actions?In From the Shadows, Book Three of The Light Series, Bria and those she loves have esca...

The floating city exists. Upon receiving the urgent missive, confirming the existence of the Flotilla, there’s nothing left for Holly to do but rush to their aid. Hundreds, if not thousands, of lives are at stake. But the government, now run b...

The Book of Etta
by Meg Elison

In the gripping sequel to the Philip K. Dick Award-winning novel The Book of the Unnamed Midwife, one woman undertakes a desperate journey to rescue the future.Etta comes from Nowhere, a village of survivors of the great plague that wiped away the w...

The Feral Children
by David A. Simpson

The bears were hungry and the panther was pacing her cage.It was supposed to be a fun field trip to the wild animal safari. It became a nightmare of blood.The zombie virus spread like wildfire and by noon, they were alone. Safe inside the fences, a ...

Survival is just the beginning . . . After a decisive battle, the treacherous lieutenant King is finally dead and buried. Having dealt with their most dangerous foe yet the survivors at Fort Detrick must look toward the future. Humanity is on ...

The stunning conclusion to the trilogy that began with Pure, recommended by People for those who loved The Hunger Games With his father now dead, Partridge has assumed leadership of the Dome, one of the last few refuges from the ravaged wastelands ...