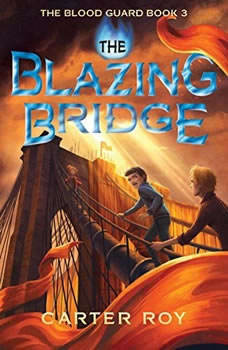 Ronan Truelove’s best friend, scrappy smart aleck Greta Sustermann, has no idea that she is one of the thirty-six Pure souls crucial to the safety of the world. But Ronan’s evil father has figured it out—and he’s leading the Bend Sinister straight to Greta. If they capture her, she’ll suffer a fate far worse than mere death. But to get to Greta, they’re going to have to go through Ronan first.Standing with Ronan are plucky hacker Sammy; witty, unkillable Jack Dawkins; and a sharp-tongued woman named Diz, who drives a dangerously souped-up taxi. One breathless close call after another leads to an ugly showdown: Ronan alone against his father, with the fate of Greta, his friends, and the entire world hanging in the balance. Will Ronan be able to rise up and prove once and for all that he has what it takes to join the Blood Guard?By turns heart-stopping and hilarious, The Blazing Bridge brings the Blood Guard trilogy to a surprising, clever, and altogether thrilling conclusion.