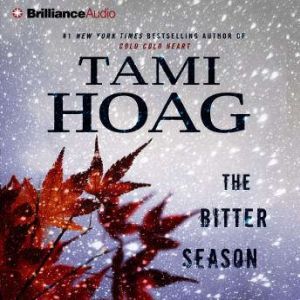 #1 New York Times Bestselling author Tami Hoag returns to the bestselling series of her career with a Kovac and Liska case that will delight fans and new listeners alike.A murder from the past. A murder from the present. And a life that was never meant to be.…As the dreary, bitter weather of late fall descends on Minneapolis, Detective Nikki Liska is restless. After moving to the cold case squad in order to spend more time with her sons, she misses the rush of pulling an all-nighter, the sense of urgency of hunting a murderer on the loose. Most of all she misses her old partner, Sam Kovac. Sam is having an even harder time adjusting to Nikki's absence, saddled with a green new partner younger than pieces of Sam's wardrobe. Sam is distracted from his troubles by an especially brutal double homicide: a middle-aged husband and wife bludgeoned and hacked to death in their home with a ceremonial Japanese samurai sword. Nikki's case, the unsolved murder of a family man, community leader, and decorated sex crimes detective for the Minneapolis PD, is less of a distraction: twenty years later, there is little hope for finding the killer who got away.On the other end of the spectrum, Minneapolis resident Evi Burke has a life she only dreamed of as a kid in and out of foster homes: a beautiful home, a family, people who love her, a fulfilling job. Little does she know that a danger from her past is stalking her perfect present. A danger powerful enough to pull in both Kovac and Liska and destroy the perfect life she was never meant to have.

Born in Cresco, Iowa and raised in Harmony, Minnesota…Tami Hoag knew she wanted to be a writer at a very young age. Her first job after graduating from high school was in the La Crosse Tribune circulation department. Before publishing her first novel, she also worked as a photographer's assistant, trained show horses, and sold designer bathroom accessories. She began her career as an author in 1988, writing category romances for the Bantam Books Loveswept Line. After several years of success in that field, Hoag switched her focus to single-title suspense novels. She has had thirteen consecutive New York Times bestsellers, including five in a 20-month span. Her novel Night Sins became a TV miniseries starring Valerie Bertinelli and Harry Hamlin.

Hoag and three other authors who made the leap from romance to thrillers at roughly the same time (Eileen Dreyer, Elizabeth Grayson and Kimberly Cates) have formed a group they call the Divas. The group provides support and encouragement for each other, and Hoag often thanks them in the acknowledgement section of her books.

Tami Hoag currently lives in Palm Beach County, Florida where she is also known as a top competitive equestrian in the Olympic discipline of dressage. Other interests include the study of psychology, and mixed martial arts fighting.