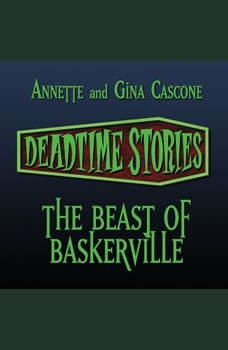 The Beast of Baskerville: Deadtime Stories

The Deadtime Stories by "Twisted Sisters" Annette and Gina Cascone—they'll scare you silly.Everyone in Baskerville knows about Jimmy Leeds. In fact, Adam Riley and his friends have been telling scary stories about Jimmy for years—stories they don't really believe. After all, how can anyone believe in a half-human beast with horns and hooves? But the legend of Jimmy Leeds isn't just a story. When all the kids in the neighborhood decide to have a giant campout, Adam and his friends learn much too late that the streets of Baskerville aren't safe—especially after dark. One by one, Adam's friends start disappearing into the night. At first, Adam thinks it's some kind of joke—until he follows the hoofprints into the nearby woods, and finds himself face-to-face with the Beast of Baskerville….