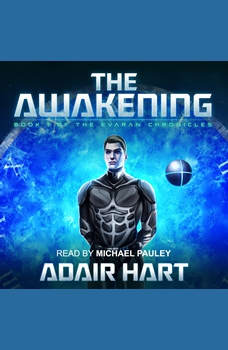 The Awakening: Book 1 of The Evaran Chronicles

What happens when a space and time traveler interferes with an alien abduction?

Dr. Albert Snowden just wanted to take care of his niece, Emily. The last thing he expected was to end up in a virtual simulation on a damaged alien ship in another galaxy one year into the future. Unfortunately, the ship’s power is failing, releasing apex predators that were captured by the aliens.

Enter Evaran, a space and time traveler, and V, his trusty mobile artificial intelligence, who help those in need. They decide to interfere and help Dr. Snowden and Emily, along with two other humans who were also abducted.

In addition to all that, Jerzan Graduul, leader of the Bloodbore mercenary pack, has boarded the ship in search of potential salvaging opportunities. Evaran and friends will try to reach Evaran’s ship while dealing with the Bloodbores and apex predators.