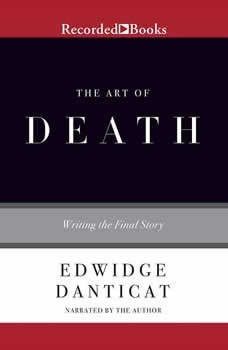 The Art of Death: Writing the Final Story

A moving reflection on a subject that touches us all, by the bestselling author of Claire of the Sea Light Edwidge Danticat's The Art of Death: Writing the Final Story is at once a personal account of her mother dying from cancer and a deeply considered reckoning with the ways that other writers have approached death in their own work. "Writing has been the primary way I have tried to make sense of my losses," Danticat notes in her introduction. "I have been writing about death for as long as I have been writing." The book moves outward from the shock of her mother's diagnosis and sifts through Danticat's writing life and personal history, all the while shifting fluidly from examples that range from Gabriel Garcia Marquez's One Hundred Years of Solitude to Toni Morrison's Sula. The narrative, which continually circles the many incarnations of death from individual to large-scale catastrophes, culminates in a beautiful, heartrending prayer in the voice of Danticat's mother. A moving tribute and a work of astute criticism, The Art of Death is a book that will profoundly alter all who encounter it.

A touching tale of parent-child separation and immigration, from a National Book Award finalist After Saya's mother is sent to an immigration detention center, Saya finds comfort in listening to her mother's warm greeting on their answering machine....

This book contains essential information for every beginner when it comes to the Akashic Records.In this book, you will be provided with the basics—including interesting historical points referencing the existence of the Akashic Records as a v...

Zen in the Art of Writing
by Ray Bradbury

"Every morning I jump out of bed and step on a land mine. The land mine is me. After the explosion, I spend the rest of the day putting the pieces back together. Now, it's your turn. Jump!" Zest. Gusto. Curiosity. These are the qualities every write...

A haunting and mesmerizing story about sisterhood, family, love, and loss by literary luminary Edwidge Danticat. Giselle Boyer and her identical twin, Isabelle, are as close as sisters can be, even as their family seems to be unraveling. Then the ...