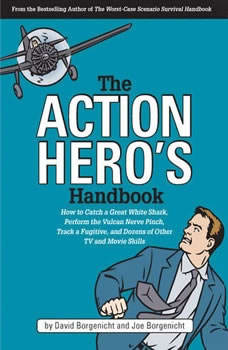 The Ultimate Guide to Keeping Up with the Indiana Joneses

For everyone who’s ever wanted to be as smooth as James Bond, as clever as Captain Kirk, or as tough as Charlie’s Angels, The Action Hero’s Handbook is the ultimate guide to the essential skills every action hero needs to survive and thrive in this dangerous but exciting world.

This book features dozens of real-life action hero techniques, directly from experts in the subjects at hand: FBI agents, sexologists, stuntmen, hypnotists, karate masters, criminologists, detectives, and many others. Learn how to:

And dozens of other Good Guy Skills, Paranormal Skills, Fighting Skills, and Escape Skills. With meticulously researched step-by-step instructions and easy-to-follow illustrations, The Action Hero’s Handbook will get you ready for anything. Good luck—we’re all counting on you.